Process of peer review and publication

The process of peer review and publication in the interactive scientific journal Safety of Nuclear Waste Disposal (SaND) differs from traditional scientific journals to enhance quality by transparency. It involves a discussion stage, where public commenting on the submitted preprint is invited by the referees, authors, and other members of the scientific community. All participants are encouraged to stimulate further deliberation rather than simply defend their position. Authors are invited to take an active role in the debate by posting author comments as a response to referee comments and short comments of the scientific community as soon as possible in order to stimulate further discussion by interested scientists. The handling editor's request for revisions and final decision takes all comments into account.

In all cases, also if no additional comments from the scientific community are received, a full peer-review process in the traditional sense, albeit in a more transparent way, is assured before publication of a paper in SaND.

The process follows the following steps:

A subset of editors is invited based on matches between keywords selected from a menu by the authors and expertise keywords stored for the editors. The first editor to accept handling the article serves as the handling editor throughout the review process. If none of the editors accepts to handle the article within a few days, one of the executive editors is called upon. Further information can be found on the page on how to find an editor.

The handling editor evaluates whether the manuscript is within the scope of the journal and whether it meets basic scientific quality. In addition, the editor can suggest technical corrections (typing errors, clarification of figures, adequate provision of access to data and software, etc.) before posting in SaNDD. Further requests for revision of the scientific contents are not permitted at this stage of the review process but shall be expressed in the following open discussion state. In addition, the editor invites at least 2 (typically 3-5) reviewers to provide referee reports. Copernicus Publications checks the manuscript for plagiarism.

Following the access decision, the manuscript obtains a DOI and is displayed as a preprint. The preprint can be cited and serves as proof of priority. This is equivalent to an upload to preprint servers like arXiv, chemRxiv, or bioRxiv, except that the preprint has been checked for basic quality. The preprint platform is called Safety of Nuclear Waste Disposal Discussions (SaNDD). The preprint is not part of the final publication.

At this stage, which is called the discussion stage, everyone can comment on the preprint, but comments must be signed, i.e., may not be anonymous and commentators must log in. Only the invited reviewers have the choice to remain anonymous. The reports of invited reviewers and responses by the authors are public, as are the comments posted by the everybody else. Please note the further explanations about the types of comments and the review criteria.

After 6 weeks, the discussion is closed for reviewers and the public. It remains open for longer only if less than two reviewer reports have been obtained. The discussion trail remains publicly accessible as supplement to the preprint.

The authors must provide a response to all comments during the open discussion or at most 2 weeks after. Formal editorial recommendations and decisions shall be made only after the authors have had an opportunity to respond to all comments. The handling editor will make a decision based on all comments made, not only those by the reviewers, and any revised manuscript uploaded after the end of the discussion period.

Based on the authors’ response, the editor may

At this stage, the process is as in conventional peer review, i.e., no longer public, but the exchange will be made public later together with the discussion trail, if the manuscript is accepted for publication. If the authors appeal the editor's decision, the case is reviewed by one of the executive editors.

In the case of acceptance, the final revised paper is copy-edited for English, typeset, and proofread. Then it is published on the SaND website with a direct link to the preceding preprint and interactive discussion in SaNDD. In addition, all referee and editor reports, the authors' response, as well as the different manuscript versions of the peer-review completion will be published. All publications (preprint, interactive comments, final revised paper) are permanently archived and remain accessible to the public. Rejected manuscripts and the discussion/reviewing trail remain in SaNDD and cannot be withdrawn.

Types of comments in SaNDD

In the interactive public discussion in SaNDD, the following types of interactive comments can be submitted for immediate non-peer-reviewed appearance alongside the preprint (manuscript in discussion):

The authors and editor of a manuscript in discussion are automatically informed via email about the appearance of comments in the interactive public discussion. Alert services are also available to other members of the scientific community. The interactive discussion is supervised but not actively moderated by the editors, who have the option of censoring comments that are not of substantial nature or of direct relevance to the issues raised in the manuscript in discussion or which contain personal insults. Authors are advised to follow the discussion of their preprint and to notify the Copernicus Publications Editorial Support and the handling editor in case of abusive comments. The SaND editorial board reserves the right to exclude abusive commentators.

All comments receive their own DOI and are fully citable and archived in SaNDD. Comments can be composed by using the WYSIWYG editor for HTML content. More complex content can be uploaded as a *.pdf file and will be displayed as a supplement to the comment. Figures can directly be included in the comment.

After the open discussion

After the open discussion, no more community comments and referee comments can be accepted. However, the contact author and the editor of the manuscript in discussion have the opportunity to post final author comments and editor comments, respectively. Following conclusion of the discussion period, the authors are welcome to submit a revised version of the manuscript. The upload must be accompanied by a detailed description of the changes made in response to the comments made during the discussion phase and a copy of the manuscript that highlights the changes made. The author comments should be structured in a clear and easy-to-follow sequence: (1) comments from referees/public, (2) authors' response, and (3) authors' changes in manuscript.

The response time is expected to be 2 weeks (can be extended to 4 weeks).

The timings indicated above are a guideline which may have to be modified according to the availability and response times of editors, referees, and authors. 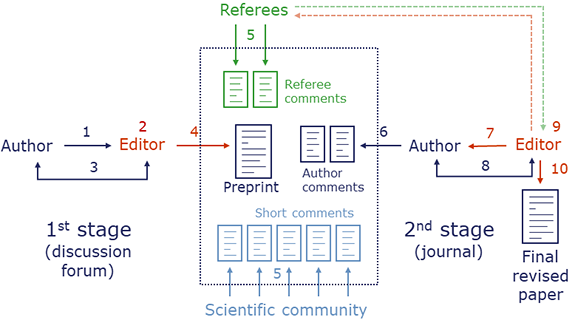